North and Central Asia are already cold. In Mongolia, the bows will be stored away in the outhouse with the stored meat for the cold months. Others will be finding it hard to practise traditional archery in sub-zero temperatures. In Queensland, it may be too hot for comfortable practice right now.

In Asia, we can practise indoors with the 'makiwara'. To the Japanese, that is a straw target (for archery) or a padded board for karate and other martial arts. In the West, the equivalent might be a close up straw target butt or a punch-bag. The overall aim is the same: to practice technique without having to think too much about the consequences.

In China, the 'makiwara' was known as the 'gao zhen'. It was made from a tightly-bound roll of straw matting or rice stalks, forming a cylinder about one metre long and half a meter in diameter.There is some black humour in the Chinese name: it was also the name for the chopping block and straw mat used for official executions with the sword. 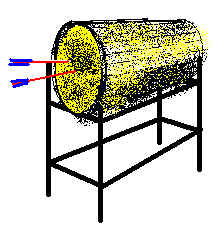 Here is a short essay by the Ming Dynasty author Gao Ying. In his 1637 archery textbook, "The True Method of Military Archery". Gao Ying devoted a centre-section in his book to 'Identifying Idiocy'. One of his themes was 'Makiwara Madness'. His work, revered by the eighteenth century Japanese scholar Ogyu Sorai, forms the cornerstone of a number of methods of Kyudo.

I hope you enjoy his mixture of professional  teaching, gentle humour and profound commonsense.  Anyone who devotes him- or herself to hours of short-range archery drill should find something worthwhile in it.