Summer is upon us here in Hong Kong and I'm about to go off on holiday.

(Holiday! Again?? This guy's  always gallivanting off somewhere. How does he ever get any work done?)

Yes, Holiday. I'm off for four weeks in Britain. So this letter is going to cover both July and August. I'll be spending three weeks in North Wales, sans email and sans WWW. (Well, ok, Cafť Internet Pwllheli perhaps.) Which being the case, I've chickened out of re-building the discussion forum with snazzy new software because it's bound to go wrong for a bit and I can't service it from Cafť Internet Pwllheli at 28Kb. I'll get onto it when I get back.

Kay and Jaap Koppedreyer are back from Bhutan and Kay is promising us an article on Bhutanese archery and bow-making.  I'm just putting this down on record so that she can't back out. As an encouragement, Kay, here's a nice picture of Himalayan archery - this is Dhanma, General to King Gesar of Hor, practicing a bit of horseback archery (Tibetan, around 1955.) I bought this painting in Edinburgh in the 1970s. It used to belong to the Tibet Scholar, Charles G. Bell. 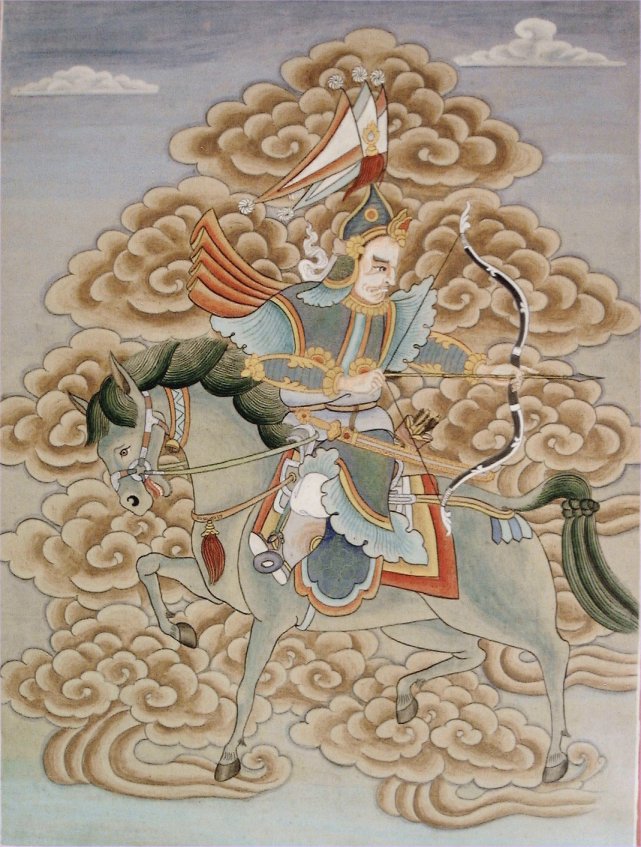 The Second World Horse Archery Festival is on this year at Fort Dodge, Iowa, from 6 - 9 September 2001. I hope ATARN Members will strongly support this event. Here are some of the highlights (this is a preliminary draft programme and many items have yet to be confirmed) -

Don't stop nagging your bank manager till he's loaned you the money for the event. For further information, please contact the event managers.

I have been doing some intensive work to prepare for the permanent Archery Collection to be displayed at the Hong Kong Museum of Coastal Defense. The exhibition should be able to open in March 2002, and you will all be welcome to come to the opening. We plan to have the Peking Bowyer, Ju Yuan Hao, in Hong Kong to give a demonstration, and he is preparing to create exact copies of all his specialized tools for the exhibition and explain how they are used. I hope the exhibition will have a fine printed catalogue. (That is to say, there will be one if I get off my butt and write it.) We will be concentrating on the construction and culture of the Asian horn bow, with the emphasis on China and her national minorities.

Here's one of the proposed exhibits - a tomb painting dating from the Northern Wei Period (about 450CE) on wood showing  a mounted bow hunter.